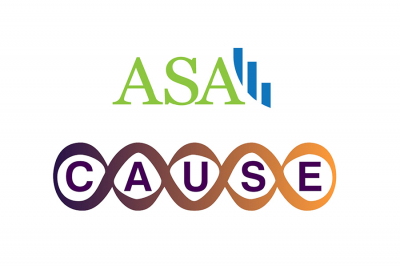 Linda Tang was awarded first place for her project, “Psychiatric Comorbidity in Opioid Use Treatment Outcomes.” This study, utilizing the 2019 Treatment Episode Data Set (TEDS) from the Substance Abuse and Mental Health Services Administration, examines the relationship between psychiatric comorbidity and the incidence of opioid treatment completion/dropout to assess whether this relationship is dependent on the race of the client.

Lillian Clark received second place for her project, “Waiting for Trial: A Case Study of Detention Times Prior to Sentencing.” With the project, Clark conducted survival analysis of Bureau of Justice data to determine whether a person’s race is associated with the length of time they were detained in jail prior to trial.

“I am so excited for Linda’s and Lilly’s achievements in winning these nationally competitive awards,” said Professor Jiang. “Their submissions were actually class projects from the senior capstone course in applied statistics during the Fall 2021 semester and I know firsthand the incredible amount of time and energy they devoted to them. I am especially proud of this hard work, and their ability to use statistics to answer research questions that they were personally interested in.”

“Blue Blood Basketball” examines the skill set and NBA success-rate of players from five widely recognized “blue blood” programs – Duke, UNC, Kansas, Kentucky and UCLA. The project analyzed these school’s NBA-drafted players between 2000 and 2016 to see if they performed better than other players drafted during that period.

“I am thrilled this team's project was recognized as a top finisher in the statistics class project competition,” said Professor Tackett. “Kevin, Matthew, Eric, and Gian worked really hard and were thoughtful about how they used visualizations and statistical results to tell a story about NBA performance outcomes for players from different universities. Their work demonstrates the in-depth and creative analysis students can achieve in the introductory course!”