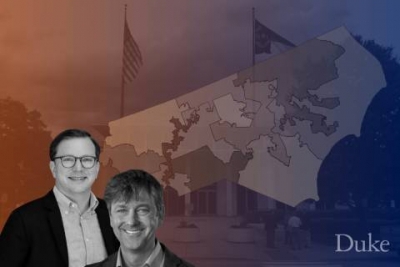 DURHAM, N.C. -- As North Carolina lawmakers debated new district maps for the state legislature and the United States House of Representatives, two Duke experts spoke to journalists about what the newly drawn maps could mean for North Carolina voters and future elections for the next decade:

“They're not better and in some respects worse. But there are really two questions here. The first is a question about the redistricting process. And the second is a question about the outcome. You've heard a lot over the last few weeks about some of the procedural changes that Republican leaders adopted this time around. And in particular, their decision not to use partisan or racial data in the drawing of the maps. And their decision to draw the maps in public view in the committee hearing room. And those certainly represent improvements over the process Republicans used a decade ago and the process used by Democrats before that, though in other respects, the process has left more to be desired.”

“The problem, though, is that an improved process does not equal an improved outcome. And that's abundantly clear in the maps that they've chosen to approve. The state legislative maps would put Republicans at or within reach of veto-proof majorities in both chambers. And the congressional map would likely result in Republicans winning at least 10 and possibly 11 of the state's 14 congressional seats in a state that has been within a couple of points in one direction of … 50/50 … for some time now.”

“Now, in the debate over the last few days, we've heard Republican legislators say repeatedly that this outcome was kind of an inevitable result of some of the criteria they adopted, and in particular, a result of the fact that Democrats tend to live in cities and therefore a map that preserves municipal boundary will inevitably benefit Republicans. This is simply not true. It's true that there is self-sorting, and that voters do tend to deliver in certain geographies. But it's very possible to draw a map that respects municipal boundaries, and also produces a fairer outcome. And indeed, there have been plenty of examples of such maps proposed by members of the public and Democratic legislators and nonpartisan experts throughout this process.”

“There's nothing inevitable about the extreme partisan gerrymander that they've produced. Gerrymandering is a choice, and it's a choice that they didn't have to make.”

On what Duke research shows

On the extent to which the proposed map makes it possible for voters to elect their preferred candidates:

“There are a couple overall lessons that we keep learning again and again. One of them is if we really truly do not include political data, we always see maps that are responsive, whose outcomes change as the electorate changes its political preferences.”

“(The proposed map) pretty much bakes in four Democratic seats. So in some sense, the outcome of this election, with the exception of maybe one seat, is pretty much decided before the election happens.”

On efforts to increase transparency in how maps were drawn

“I think they made some difference in the public's ability to track what was happening in real time, especially the broadcasting of the map drawing sessions. They don't … appear to have made much of a difference on the outcome, however. The map they eventually selected was very similar to one drawn on the very first day of the process. It's unclear how much -- if any -- public input it reflected. And while they did, in unveiling the map, cherry pick some statements from the public hearings to justify some of the decisions they made, it's not clear if they considered public comments in any kind of systematic way in developing the map.”

“There are also just fewer public hearings overall than there were a decade ago, and many of them, the public had to participate in, in person, despite the COVID-19 pandemic. So transparency is good. But it doesn't always mean that the public can actually understand what's happening in context.”

On the role of technology in redistricting

“Technology cuts both ways. In one sense it has enabled more precise gerrymandering, even in situations where there's not partisan data being used. You know, where geography can be a proxy for partisanship. On the other hand, as professor Mattingly’s analysis demonstrates, technology also provides some tools for measuring, detecting and maybe eventually restraining gerrymandering. You did not see in the process the kind of evidentiary smoking guns that we saw in the last decade. And that means that these analytical tools like the one developed by professor Mattingly, which allows us to infer intent, I think are going to be especially important moving forward.”

On their analyses of the state legislative maps

“We found that the map that has been proposed for the North Carolina House really dramatically under-elects Democrats. We have similar analysis for the Senate.”

On where Republicans and Democrats live in North Carolina

“Two things can be true, it can be true that Republican voters are more dispersed and Democratic voters are more concentrated and therefore professor Mattingly’s analysis shows the inclusion of municipality criteria systematically benefits Republicans in that way. But it can also be true that that doesn't necessarily mean that the map they drew was inevitable. There are plenty of available maps that could have still shown decent respect for municipal boundaries and, and still produce a fairer outcome.”

“Our analysis takes into account the tendency of Democrats to pack. … Of course there's a natural advantage to a political party that is more spread out. However, you still see a dramatic under-electing of Democrats, even when you take that into account. So there's definitely a tilt beyond what would be accounted for by geographic packing in the North Carolina House, for example.”

On how to improve things going forward

“If there's one takeaway from this round, for me, it's been that a fair process does not necessarily produce a fairer outcome. And there are ways that states have to restrain the partisanship of the outcome. One way that's been proposed here (in North Carolina) and in other states is to take an analysis like professor Mattingly’s and use it as kind of a safeguard to say, ‘OK, whoever draws the maps, whether it's a commission or legislators or whoever, if they want to claim to be nonpartisan, then let’s use this analysis to make sure, before we enact them, that that they're not overly skewed in one direction. I don't diminish the importance of procedural changes, but we also can't lose sight of what the outcome should be.”

“The discouraging thing here (in North Carolina) is that despite a decade of unprecedented engagement and advocacy in supportive of fairer process and fairer maps, it feels right now, like we're kind of right back where we started a decade ago, with a process that's modestly fairer in some respects, but not as a result of statutory changes simply as a result of discretion exercised by the by the majority, and an outcome that is, again, at least as bad and perhaps worse than it was a decade ago from a perspective of partisan fairness.”

“Maybe that means that citizens need to be even more engaged, certainly contacting legislators, making sure that once these maps are approved as I expect, they will be within the next day or so. You know that the issue doesn't fade from faith from the front burner that citizens remain in contact with their elected officials in demanding a fair process, and just hope that we're not in the same place that we are a decade from now.”

On prospects for fairer maps for North Carolina

“There are two things that allow me to maintain some optimism here. One is that historically, nonpartisan redistricting has not been an issue that's fallen neatly on partisan lines. It's tended to be supported more by the party out of power than the party in power. But in North Carolina, Republicans were really the first to propose an independent commission. And so it is an issue that has bipartisan support historically.”

“The second thing that makes me optimistic is the level of citizen engagement over the last decade, especially. People are attuned to this issue in ways that they weren't before. And they been motivated to organize and advocate and even vote based on this issue in ways that they haven't been before. The key challenge is how to create the conditions for reform before we’re at the end of the decade. I don't think there's any question these maps will be approved. There's clearly no question that they will be litigated and perhaps that litigation will produce a fairer outcome. But ultimately, this is going to require a change through statute or constitutional amendment to the way maps are drawn. And again, hopefully, those conditions will come before it's 2029 or 2030 and we're having the exact same discussion.”

“This happens on both sides of the aisle. Both parties do this across the country. I would like us as a country to get out of the gerrymandering business. I would think that would be great for how we feel about our democracy.”

Asher Hildebrand
As an associate professor of the practice, Asher Hildebrand teaches politics and policy analysis at the Sanford School of Public Policy. His academic interests include American politics, legislative institutions, civic participation and advocacy, democracy reform and U.S. foreign policy. Hildebrand served for nearly 15 years in Congressional offices and on political campaigns. He was formerly chief of staff to U.S. Representative David Price (D-NC).
asher.hildebrand@duke.edu

Jonathan Mattingly
Jonathan Mattingly is a professor of mathematics and statistical science at Duke University. Since 2013, he has been working to understand and quantify gerrymandering. Mattingly has testified in a number of court cases, which led to the North Carolina congressional and both North Carolina state legislative maps being deemed unconstitutional and replaced for the 2020 elections.
jonm@math.duke.edu

Duke experts on a variety of topics can be found here.