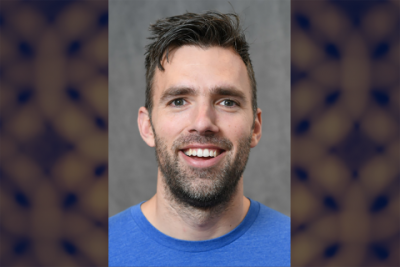 If hanging upside down from a crane while escaping a straitjacket seems like suitable training for today’s topsy-turvy campus environment, then statistician Eric Laber is primed for success.

That daring escape is just one of many tricks Laber performed during a 12-year-career as a professional magician. But now he’s distinguished professor at NC State who will be joining the Duke faculty in the departments of statistical sciences and biostatistics and bioinformatics in January.

The breadth and scope of his work have led to an NSF CAREER Award and an enormous statistical research group at NC State: 35 people, from high school kids to visiting scholars, in about 6,000 square feet.

“We have a big open space with a lot of computing equipment, whiteboards all over the place,” Laber says from his brightly lit Zoom studio in a Cary attic. “And we do have some equipment, like autonomous vehicle models, these scaled-down cars that have sensors all over them so you can work on reinforcement learning in autonomous vehicles. We do a lot of work on artificial intelligence in games, so we have a gaming console setup too.”

“I did get a kind of reprimanding email from somebody once that they had walked by the lab and seen students playing video games in the middle of the day and I had to explain that this is what they do for their dissertations.”

Some industry partners from a major airline even moved their desks into the lab. His industry collaborators often come to him just wanting to solve a problem, but Laber says he enjoys taking the problem down to its theoretical underpinnings to understand it better.

Though Duke is world-renowned as a center for Bayesian statistics, Laber said he’s not a complete devotee. “Pragmatist is maybe the word. Sometimes if a Bayesian solution is the right one, then I wouldn’t hesitate to use it. And I started at Duke (as a graduate student), which means I had basic training!” For family reasons, Laber completed his doctorate at the University of Michigan after just one year at Duke.

Statistics were not really on his radar as an undergrad, Laber recalls. “I had gone to UCLA (from Minnesota) primarily so that I could work in a magic theater in Santa Monica, just on the weekends.”

He was a math major, probably on track for a PhD in differential geometry. “At some point, I was hanging out with the math graduate students and I sort of had this revelation that if I continue down this path, I was going to live the rest of my life in my own head.” A friend of his suggested he try statistics, so he sought out UCLA professor and digital artist Mark Hansen to understand it better. “And he just set me up with a research project.”

Lately, Laber’s work on healthcare has been focused on study designs for clinical trials. “I'm interested in looking at hybrid trials where you have kind of a classic clinical trial with therapeutics being delivered to the patient, but then also supportive care delivered through telehealth or through mobile health, and trying to find the best way to find combination treatments that involve those different components.”

Laber says he is looking forward to his Duke collaborations. “I got the sense talking to people that they really do give you the space to try new things, and that's pretty exciting.”

In addition to teaching statistics, of course, Laber enjoys teaching computing. “I tend to give them a lot of really open-ended, pretty challenging, computing questions.” Such as building an AI system to play Scrabble. “I like doing courses like that, because you can give the students more work than they could possibly do. But they sort of go as far as they can, and they really stretch and grow.”

And that too is sort of a magic trick.

Laber lives in Cary with his wife, a statistician at SAS, and two daughters.