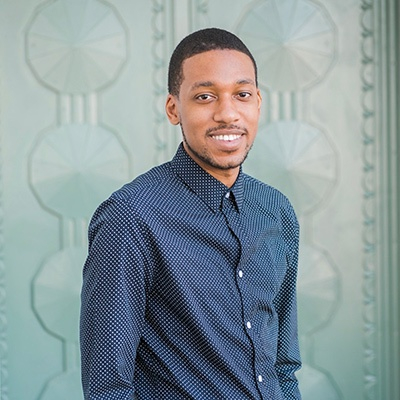 Duke alumnus Lorin Crawford SS’17 has been named a 2020 Packard Fellow, a prestigious fellowship awarded to the nation’s most promising early-career scientists and engineers. Crawford, who is currently the RGSS Assistant Professor of Biostatistics at Brown University and a senior researcher at Microsoft Research New England, is part of a group of 20 scientists who will each receive $875,000 over five years to pursue their research.

Crawford said that his interdisciplinary experiences at Duke helped pave the way for his success as a leading researcher in biostatistics. As a PhD student in the Department of Statistical Sciences in Duke’s Trinity College of Arts and Sciences from 2013-2017, Crawford developed an interest in applied biostatistics, and encouraged by his advisor, Sayan Mukherjee, PhD, began working in the lab of Kris C. Wood, PhD, associate professor of pharmacology and cancer biology in the School of Medicine.

At first, Crawford functioned as a ‘fly on the wall’ in the Wood lab, carefully observing the group’s work studying the problem of cancer tumor resistance to drug therapies. Working in a biomedical research lab was a lot like “studying abroad in a foreign country where you don’t speak the language,” said Crawford. But over time, he began to absorb exactly why tumor resistance to drug therapies is so complex and difficult to overcome. When patients with advanced cancer are treated with a drug, they may do really well for a while but then the cancer can come back.

“And when the cancer comes back, it’s usually not just one thing that happened in the tumor to make it overcome the effect of the drug and start growing,” said Wood. “Usually, it’s many different things that are happening. And that’s really hard because it means that even if you could diagnose and block one of those things from happening, the tumor would still find a way to come back.”

Wood challenged Crawford to think about the problem and was amazed at the results. Crawford hypothesized that although there are many different reasons that a tumor can become resistant to a drug, they might all be connected to each other. He developed a computational method to analyze the genomic data from patients whose tumors were sampled before they were treated with a drug, when they were treated with a drug, and then after they relapsed. Then, he devised a method that he could use to look for commonalities among all the different resistance samples.

“That was really important because it allowed us to see that there were shared features of these different flavors of resistance, and once we recognized this, we recognized we could block many different resistance mechanisms at once,” said Wood. “That concept has very much taken off in the cancer field. Really, it was Lorin’s work that started that thinking in the field to a large degree. From a biological perspective there was a big conceptual advance that happened because of that first work that we did together.”

Crawford has since taken this idea and applied it to many other biological problems. With the funding from the Packard fellowship, he plans to support students in his lab who are tackling health-related problems from a computational perspective.

“I wouldn’t be here without Duke,” said Crawford. “When I got to Duke, they made sure that I succeeded. The thing that helped me get the confidence to do this was that I was told that I could do this, and repeatedly.”

In addition to the 2020 Packard Fellowship, Crawford also received the 2019 Alfred P. Sloan Research Fellowship, and was recognized on two notables lists: the 2019 Forbes 30 Under 30 and The Root’s 100 Most Influential African Americans in 2019.

“If you look at people who are super successful, they often have both extraordinary intellectual gifts and extraordinary tenacity, and Lorin really had both of those things to an extremely high degree. And I think that’s why, when he was leaving, we thought, he’s going to be successful no matter what he does,” said Wood.

“There is a saying by Charlie Parker, ‘First you learn the instrument, then you learn the music, then you forget all that s**t and just play’,” said Mukherjee, professor of statistical science and mathematics. “Lorin is an exceptional statistician: because he first learned all the math, stats, and computation; then he learned the biology and how to speak to and with biologists; then he internalized all of this and became an exceptional modeler. I am very lucky to have mentored a student as gifted as Lorin.”